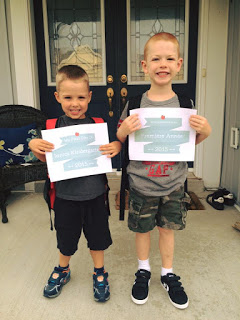 Every morning my 4 year old lies on the floor, crying, and begs me not to send him to school.

He’s a kid that went to daycare and camps and Sunday School. He is used to me leaving him in a group setting with an adult (sometimes an adult that is still a stranger) in charge. He has never cried or begged me not to go.

But then he started Junior Kindergarten.

This isn’t my first rodeo. I have an older son who has gone through JK, so I went through the mental checklist that I am sure most parents go through:

Except for us it did not go well.
It went the exact opposite of well.
He has spent the past weeks crying daily and begging me not to send him back to “that place”.

“Because there are too many kids and it’s not fun.”
“Because I never know where to go or where my class is.”
“Because I can’t find my friends on the playground.”

Because his classroom is overwhelmingly full of kids.

As a former teacher and a parent I LOVE the idea of full day kindergarten. I think it gives our youngest the ability to learn and develop skills that will help them flourish as they grow. I also agree that our kids need to learn to fail, learn to adapt and learn to handle new situations, even at a young age.

What I don’t agree with- and what I realize is causing my son and many others like him immense stress as he endeavours to acclimate to school- is extreme class size.

30- 35 kids in a kindergarten classroom is not just too much, it’s practically unmanageable.

We live in a suburban neighbourhood that was built for families. Too bad they didn’t build enough schools or allocate enough space. Our kindergarten classrooms are bursting at the seams. Our phenomenal teachers are forced to control the crowd of chaos that ensues when an overstuffed classroom of 4 and 5 year olds is seen as the “norm”.  The pen (which is what they call the kindergarten playground, sadly) is another place of chaotic crowd control.

It seems that schools didn’t learn their lesson from the 2014-15 school year. It seems that capping class sizes still isn’t a priority despite the fact that the over abundance of kids makes learning (and even playing, which is the basis of full day kindergarten, isn’t it?) nearly impossible. It seems that doing what is best for our kids is not even a consideration.

How do you jam 30-35 four and five year olds into a classroom with one teacher and one ECE and expect them to learn anything? How do you cram that many kids in a room and expect them to feel anything other than stressed out and overwhelmed? Common sense says, you don’t.

Our country is one of the most progressive and revered- and yet the way we approach our education system says that education isn’t a priority and, even worse, our kids are not a priority. As I wipe away my son’s tears and tell him it’s ok to be nervous and he will figure out his way in that sea of kids,  it pains me to see us making the same mistakes when it comes to our public schools- not learning from them- and failing our youngest and most vulnerable over and over again.