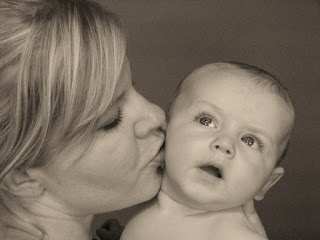 Bless your heart Meghann Foye, because I actually quite like the idea of a “Meternity”.

You know exactly what I’m talking about right?

It’s a revolutionary idea that women who don’t have kids should be granted the same amount of “time off” as women who take maternity leave. They, of course, will use that maternity time to really reflect on who they are, where they’re going, and where they want  & need to be.

In fact, it sounds like something we all should have. We live in a world where we are defined by our gender, our jobs, and our marital status –  uninterrupted time to ascertain if we are truly happy with the way we are steering our life would most likely make a huge difference in our happiness and our choices as we navigate our late 30s and beyond. It’s a fantastic idea.

Comparing it to a maternity leave, though, is where you lost me.

Now I know, I know that, really and truly, your main objective with all these ideas is to push your fictional novel (aptly called Meternity) and may not even mean a word of what you have said.

The idea of a “meternity” has kinda taken off, whether Meghann meant it to or not.

Here’s the thing. I know how hard most women work and how much they deserve a break.
I absolutely believe that non-parents end up doing the crap at work that the parents couldn’t or wouldn’t do because they had to leave to do a daycare or after school drop-off or pick-up. They are forced to field after-hours calls from an annoying client because the other members of their work team are at home with their kids. Even weekends are probably delegated to the one without kids.

Believe me. I know they get the crap end of the stick when it comes to work.

I absolutely know that you, Meghann, mean well as a writer, basing the following solely on your own personal experience or what you imagine maternity leave to be. As you said:

[T]he more I came to believe in the value of a “meternity” leave — which is, to me, a sabbatical-like break that allows women and, to a lesser degree, men to shift their focus to the part of their lives that doesn’t revolve around their jobs.
For women who follow a “traditional” path, this pause often naturally comes in your late 20s or early 30s, when a wedding, pregnancy and babies means that your personal life takes center stage. But for those who end up on the “other” path, that socially mandated time and space for self-reflection may never come….
It seemed that parenthood was the only path that provided a modicum of flexibility. There’s something about saying “I need to go pick up my child” as a reason to leave the office on time that has far more gravitas than, say, “My best friend just got ghosted by her OkCupid date and needs a margarita” — but both sides are valid.

But I think it’s important to be crystal clear about what maternity leave really is and is not for new mothers.

RELATED POST:   Give your kid a camera, see what kind of magic can happen...

So let’s straighten a few things out.

Maternity leave is not restful
I did watch a lot of television – in fact I watched tv day and night for the first 3 or 4 months. It sounds better than it was because I was glued to my couch with a baby who wouldn’t sleep unless he was in my arms. I had a house that looked ravaged by a tornado or some savage beast. I couldn’t grocery shop, I couldn’t clean and I couldn’t shower. It might sound great when your new mom, on maternity leave friends talk about all the Netflix they watched, but believe me, I cannot remember a single fun thing about it. I was a blurry-eyed emotional beast who couldn’t string together a full sentence let along feel “rested”.

Your post-birth body betrays you & consumes you during maternity leave
I gave birth to my first son and was home within 24 hours. I was bleeding from childbirth (and wearing full out Depends plus an industrial-sized pad to deal with it). My feet had swollen so much that I could not walk. My breasts were so sore and engorged that they did not fit into a single bra I owned and I could not even touch them without screaming in pain. I had less than 3 hours of broken sleep dealing with a baby who wouldn’t latch, a lack of milk production, and just plain old new baby crying. I couldn’t eat because I was still throwing up (it seems my body didn’t get the memo that the baby was out and the all day barfing could stop now) and I couldn’t seem to hold my pee in when I sneezed, coughed or even moved. I had stitches, nausea, and swelling – and a new baby that needed every single thing from me even though I had absolutely nothing in me to give.

You’ll never feel as lonely as you do on maternity leave
I was the first of all my friends to have a child. I want to say that my friends were there for me, the way they would have been if I’d been ghosted by an OKCupid date. But the truth is that they weren’t. They wanted pre-baby Sarah – the one who was up for a good time and ready to listen to their problems – not post-baby Sarah – the one who was bleary eyed, exhausted and could only focus on that little life that had grown inside her. My friends didn’t get me (much like Meghann doesn’t get her parent friends I assume). They didn’t understand that someone once so focused on her career now worried about the poops and cries of a little redheaded baby boy. Within weeks of giving birth the majority of my well meaning friends stopped calling and texting & they honestly didn’t come back until they too were on a maternity leave and understood what I had been going through. Losing those friends and the loneliness that came with it was just as painful as childbirth, I kid you not!

You’ll never question yourself & your ability to perform simple tasks as much as you will while on maternity leave
Let me paint a picture: formerly capable Sarah, the one who fixed all the problems at work and did stacks of paper work for others simply because she could do it faster and with fewer errors than anyone else, tried to open a jar of pickles while on maternity leave. But the jar lid wouldn’t budge, no matter what formerly capable Sarah did. And that new baby she had was screaming and crying at an alarming volume. So maternity leave Sarah, in the midst of a fully blown panic about opening those pickles, did what any sane person would do. She smashed that jar of pickles into smithereens, watching pickle juice fly.
Sounds like the logical thing to do right?
Post-baby, my formerly smart brain couldn’t figure out how to do the simplest of tasks. I would bawl in frustration, I would lay on the floor exhausted from the stress of trying to do easy things. Part hormones, part exhaustion, part whatever – there was nothing that I could do correctly and no decision that I could make that came easily. I did not finish my maternity leave with any feeling of clarity, as you would assume in a “meternity” scenario.  Instead, I went back to work more confused and (to be frank) dumber than ever.

Your work life will change post-materinity leave (and not in the way you’re thinking)
I felt the distane of my co-workers every time I got a call from daycare that my son was sick and I had to pick him up. I saw the glares of my bosses as I slinked into meetings a few minutes late because we had a delayed drop-off that morning. I had a boss mention that I needed to lose the baby weight faster than I was (edited to add: I was working in television at that time) and that no one would take me seriously if I kept putting my baby in front of my job. I can tell you, without question, that I lost out on promotions and opportunities that pre-baby Sarah would have had handed to her on a silver platter. In fact, I would say that in many ways taking my full [one year] of maternity leave spelled the end of a career I had worked my butt off for.

Listen, I get it because I was a working woman trying her darndest to make it in the world and feeling so overwhelmed by my career that I couldn’t see past it. I would have killed for a “meternity” leave [in fact I still would!]. I think the idea of time for introspection, true thought, and silence could make all the difference for any of us that feel overwhelmed in life.

But I promise you, I pinky swear, that maternity leave is simply not that time. Neither is post-maternity leave work. There is no break, no room for rest or relaxation, no introspective time on maternity leave. Rather, there is a screaming baby dictator, a torturous lack of sleep and non-baby human contact, and a ridiculous amount of poop, pee and vomit. 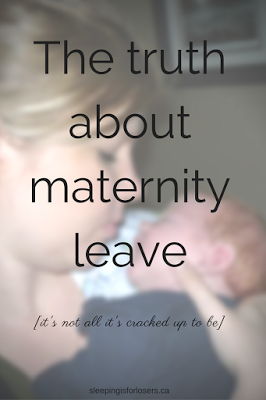